The Bear Woznick Adventure challenges men to a deep, gritty and Manly Christianity. "The Most Radical Thing You Can Do In Life is Abandon Yourself To The Wild Adventure of God's Will." Discover the radical adventure of following God's will for your life every week on this one-hour show. PLUS Look for Bear's "Catechism in a Year" Daily 15 engaging discovery through each line of the Catholic Catechism.

What Steve has learned from 180 trips to Israel

Fitness for the Temple of The Holy Spirit

Stories of a Swiss Army Guard & The Good News about Work.

BWA566 Fr Kirby | Getting Traction in the Bible

BWA566 Fr Kirby | Getting Traction in the Bible

BWA564 Deacon Charlie Echeverry | Walk Along Side - The Catholic Way

Brotherhood and Solitude We Need Both

Father Mark, Cast Member of Long Ride Home, discusses our response to the cancel culture and the growing angst towards hristians.

Milestone to Manhood - Help boys make the leap to manhood

BWA563 Doug Barry | Is our Society Doomed to Submit to Tyranny

What are the theological implications of life on other planets.

The Story of Fr Tolton first black priest in America

BWA557 Melissa Foley | You can know God's love for You

Bear chats with Professor Dr. Bradley Gregory from Catholic University of America about his love for the Old Testament.

Everything you wanted to know about Purgatory but were afraid to ask, Karlo Broussard is here! There is good news for us that aren't perfect...yet!

Bear is joined by Fr. Scott Pogatchnik, an on-fire priest from the Diocese of St. Cloud. Fr. Scott takes listeners on a journey through his path to the priesthood and the importance of brotherhood. Oh, he also shares a great love for motorcycles!

Ambassador to Portugal George Glass and his Fatima Experience

Renewing the World Through Cultural Impact

What Steve has learned from 180 trips to Israel

Bishop Joseph E. Strickland of the Diocese of Tyler, Texas joins Bear to discuss Bishop's path to his priestly vocation and he shares what men can do to lead their families deeper in the Lord.

Families are being destroyed because of Soft Men

Manners, Sex and Ruling the World

How to Defend and Communicate Your Catholic Faith

Fr Vincent Lampert, exorcist for the Arch Dioceses of Indianapolis, the sudden joy someone radiates when they are set free & then how the Church leads that person to wholeness in Jesus.

Father Mark, Cast Member of Long Ride Home, discusses our response to the pandemic, the cancel culture and the growing angst for Christians.

Father Vincent Lampert, the Exorcist for the Arch Dioceses of Indianapolis, shares what happens in an actual exorcism &  what it is like to see the power of God free people. How do people become ensnared. Why Protestants come to the Catholic Church to be set Free.

Good surf friends, Fr. Don Calloway & Bear, discuss the many  examples of St. Joseph & how men can reach out to him for  inspiration & strength in order to live a life of virtue & lead  by example for their family and community.

Scripture says Satan is the "Fleeing Dragon."  Fr. Vincent,  exorcist for the Archdiocese of Indianapolis, discusses how to defeat the wiles of the enemy.

Intent is needed in both fighting and praying

Why it is important to Cherish your Woman and How to do that.

Fr Corey's call to the Priesthood and his fun Ice Fishing?

In spite of all the challenges we see in the world and within the Church, the Holy Spirit is doing a deep work.

BWA502 Doug Barry Won't Back Down | The Bear Woznick Adventure

Bear & Jon talk about having a certain disinterestedness in ourselves and our agenda and how to love and serve others for God's sake.

BWA480 Deacon Harold Burke-Sivers - Be Bold for God | The Bear Woznick Adventure
Get out of your Safe Place and get Bold for God. Calling men to true brotherhood and standing up to the darkness that is invading our society. As you are faithful in small things, God trains you and prepares you & SENDS you to use your gifts in Powerful ways in his kingdom.
Previous
Page:
4
5
6
7
8
Next
Return to Schedule
BWA479 Early Church Response to Pandemic Wars & Persecution (Mike Aquilina) | The Bear Woznick Adventure

Bear's number one returning Guest Mike Aquilina and Expert on the Early Church's discusses how the early church responded to the darkness & persecution of its time.

Dr Scott Hahn discusses the 4 Last Things in detail; Death, Judgement, Heaven & Hell.  What actually happens at the moment of our death? What is the first judgement? What is the second judgement.?

Dr. Peter Kreeft returns to discuss the best ways to respond to Atheists.

Jesse Romero & Bear talk about their personal experiences dealing with demons and how you need to be prepared to so too. As an evangelist, Bear has encountered demons as people are first surrendering to Jesus. Jesse works with his Diocese exorcism team.  Things get real.

Fr. Mark Goring discusses what is at stake in the church today as the "Smoke of Satan" has infiltrated the Church. How do we show filial respect and love for our Priests and Bishops while we challenge them (and the whole church) to be true to the Moral & Doctrinal Teachings of the Church?

Jason Murphy comes in from a morning of sea fishing on the boat with his two young sons to sit down with Bear. During this conversation, Jason emphasizes the importance of taking the time as a father to instruct your children both in word and example. They talk about Bear coming to Charlotte, NC to speak at a men's conference in March 2021 & the importance of the men coming together to challenge & encourage each other.

In this episode of “The Bear Woznick Adventure,” I chat with surfing priest Fr. Don Calloway about St. Joseph, the Terror of Demons, as a role model who challenges us and by his intercessions helps men.

Dr Ray says Men must teach the children respect for the mom and discusses how the Anarchy in the streets points to the absence of real fathers and the breakdown of the family.

Heather of Peak Encounter Ministries talks about the experience of a Wild God out in the Wilderness.  God is calling you, challenging you and guiding you into a Deep Adventure with Him.  They discuss the fierceness of Mama Bear's and how women protect their families

BWA469 Bear talks with guest Jeff Cavins on the best ways to center your life around knowing and serving the Lord our God.

BWA467 Fr Rick discusses his book The Church Militant Field Manual: Special Forces Training for the Life in Christ.  He shares how his promising Collegiate Football Career ended suddenly with a neck injury and God set him on a path for the Priesthood.

Calling men to true brotherhood and standing up to the darkness that is invading our society.  As you are faithful in small things, God trains you and prepares you & SENDS you  to use your Gifts in Amazing ways in his kingdom.

Kramer talks with Bear about being raised by a Dad who coached an NCAA Champ basketball team. How everything seemed to be going his way as a coach, himself, when suddenly the whole dream came crashing down and how this led him to embrace God's will.

BWA464 It gets real for a successful well known local Pastor whose growing conviction of the Christ given Teaching Authority of the Catholic Faith & the Real Presence in the Eucharist cause him to take the leap from security as a Pastor into the unknown of obeying God in pursuit of truth.

This week on "The Bear Woznick Adventure," we talk with Kendra Von Esh and discuss her journey from partier to prayer warrior. You're going to want to hear what this amazing woman has to say! 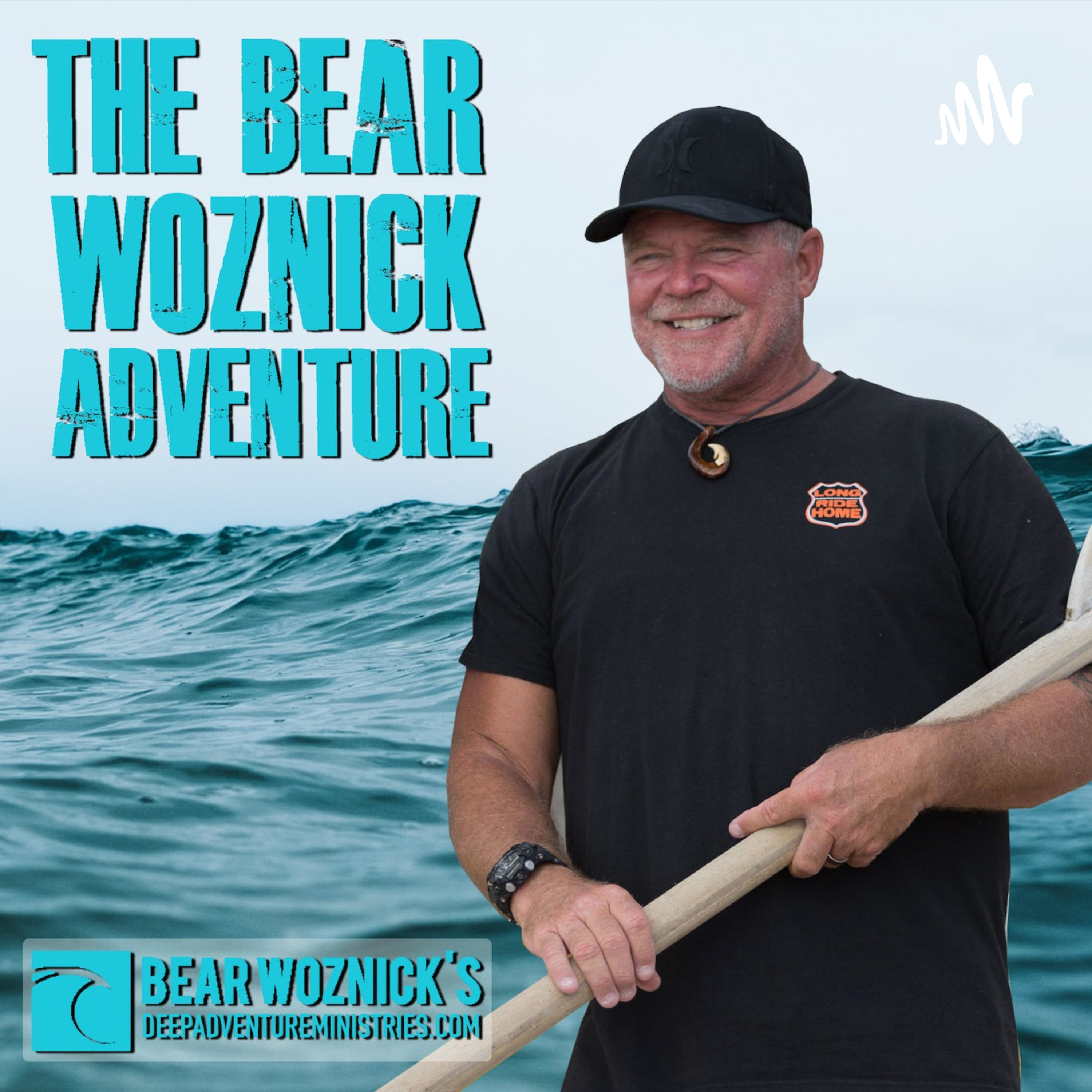